The Sole F83 Folding Treadmill - Quietest Machine on the Market

That being said, if you really have just about exactly $1,800 to spend (the usual sale price of the Sole F83 folding treadmill, you won’t be disappointed with this model at all. 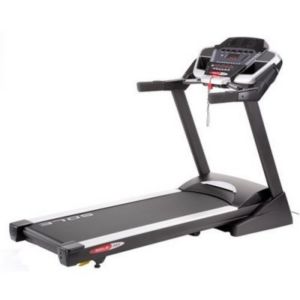 Sole always makes good treadmills, and the Sole F83 is no exception. You’ll get:

UPDATE:  The Sole F83 never really caught on and was discontinued.  Take a look at the F80 for a small step down or the F85 for a step up.  Both of these machines are Best Buy recipients.

Trainers suggest the Sole F83 an excellent choice for people who want a very stable folding treadmill for walking and jogging. They hesitate to recommend it for serious runners, however, since you can get a 3.5 HP motor on the F85 for only a few hundred dollars more. They do commend the console for being “health club quality,” with scrolling message board and a ¼ mile track feature.

There aren’t a lot of consumer reviews of Sole’s F83 model, but the few we’ve seen say they are satisfied. The biggest plus is the double horseshoe folding frame and safety lock, which they consider important if they have children in the house or want to routinely move the treadmill.

What We Say About the Sole F83

We like this treadmill; it’s a shame that it has to compete with so many other Sole treadmill models that are similar in style and features and close in price.

With the Whisper Flex deck it’s one of the quietest folding treadmills you’ll ever use, but that can be said about any of the company’s models, not just the Sole F83 folding treadmill. Final verdict – decide if this is the perfect model for you, or if you want a step up in features or down in price. Any of these is a good choice.

Show me other Sole Treadmills

UPDATE: Holiday Treadmill Sales are on!