The Carbon T10 joins the entry level T7 and the top end T14 to make up the new ProForm Carbon Series, mid-level treadmills that bridge the gap between the entry level City Series and top of the line Pro Series.

These treadmills have a lot of great features and capabilities, making them a great choice for the home gym, without having to spend a lot of money.

The ProForm Power T10 features a sleek new design, featuring a stark black frame with gray and red accents. Everything from the cushioning to the console to the ergonomics have been upgraded.

Here are the most important specs... 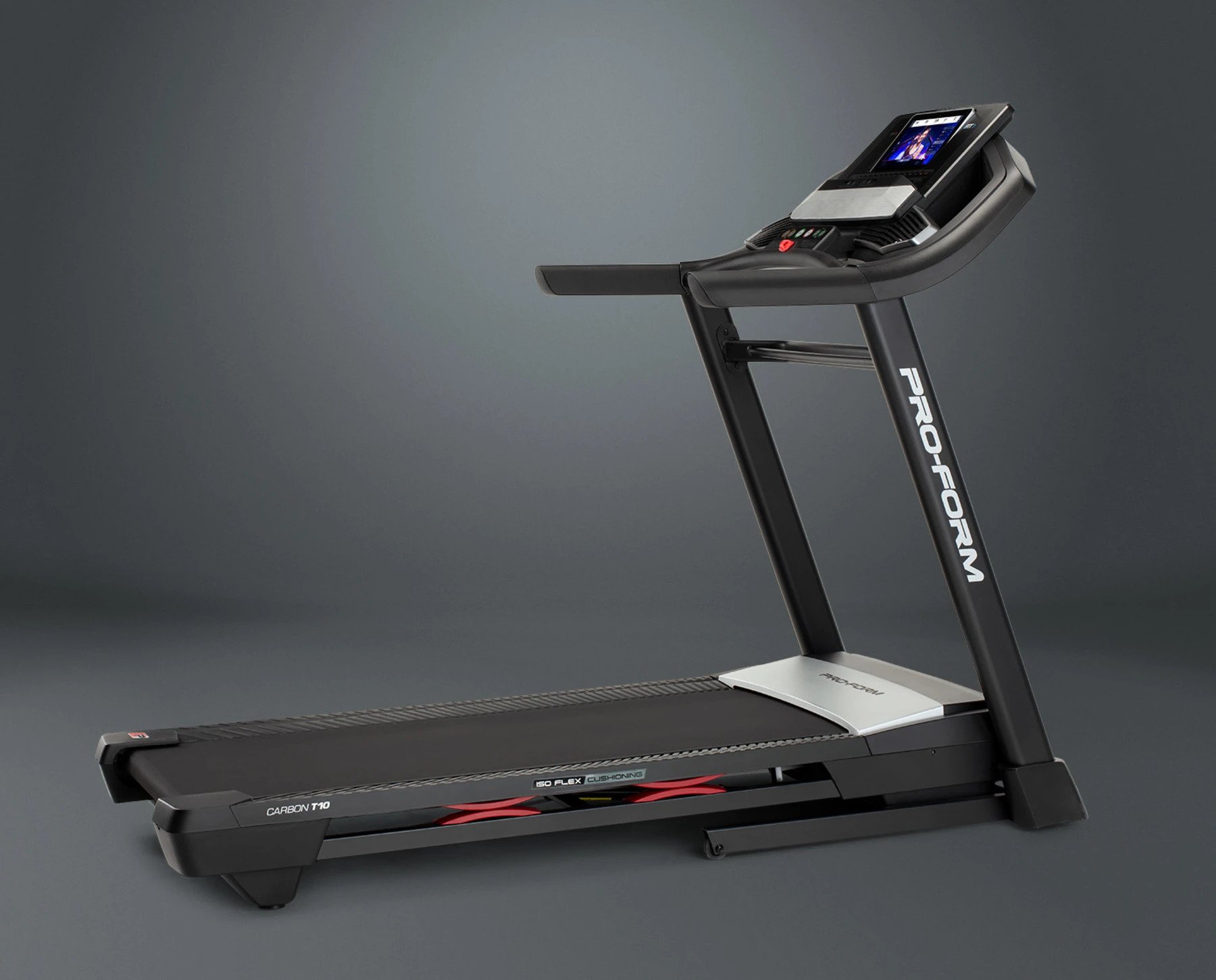 We're not sure why ProForm decided to discontinue its mid-level Performance Series, but the new Carbon Series seems to be doing a good job taking its place.

The Carbon T7, T10 and T14 are not only very affordable but they're packed with features and capabilities typically found on higher end treadmills. The two models are very similar, the only real difference being the size of the touch screen display.

The Carbon T10 has a 10" Smart HD touch screen, as opposed to the 7" one on the lower end Carbon T7 treadmill.

The newer Carbon T14 has, as you might have guessed, a 14" touch screen, the largest offered by the company.

The touch screen gives you access to the company's iFit program, a hugely popular interactive experience with both live and on-demand workouts led by personal trainers. You can work out in the studio or anywhere in the world via Google maps, and both track and share your results.

The best part is the trainer will automatically adjust your speed and incline to match the workout you have selected.

Speaking of speed and incline, you get speeds up to 10 mph and incline up to 12%. That's a big upgrade from the lack of incline and 8 mph speed on the new ProForm City L6, but not quite at the level of the higher end Pro Series treadmills.

As a frame of reference, the popular ProForm Pro 2000 features speed up to 12 mph and adds 3% decline capability to the mix.

Still, it's plenty of capability for the everyday runner. The Carbon T10 has a 20" x 55" deck with new advanced ISO Flex cushioning and a 2.75 CHP motor which is more than substantial.

One of the highlights of the Carbon Series is its folding ability. The T7 and T10 both feature SpaceSaver design with EasyLift Assist folding...the treadmill folds with the touch of a button.

Another bonus is all of the extras that you get, including a CoolAire fan, audio port with speakers and transport wheels.

All in all the ProForm Carbon T10 is a great home treadmills with just about everything you need.

How Does the Carbon T10 Compare to the Other ProForm Treadmills?

As we mentioned, the Carbon Series is in the middle of the entry level City Series and top-end Pro Series.

Let's start with the City Series and work our way up.

There's no incline and no touch screen display.

Stepping up a bit you have the Carbon T10, which as we mentioned is very similar to the Carbon T7, except with additional incline to 12% and a larger 10" touch screen display.

Taking another step up you have the Carbon T14, with some minor upgrades besides the larger 14" touch screen.

From here you move up to the Pro Series, which includes the Pro 2000 and Pro 9000 and gives you a little more of everything. (The mid-level Pro 5000 might be discontinued)

So the City Series is going to be more of a compact starter treadmill...then the Carbon Series is more of an intermediate treadmill and the Pro Series is for the more serious runner.

They range in price from about $699 on sale all the way up to $1,999, and you can also find free iFit memberships as part of the price as well.

If you're looking for a capable treadmill that won't break the bank, the new ProForm Carbon T10 is definitely worth considering for your home gym.

It has just about everything you could want...incline training, tons of workouts, ample sized running deck with solid cushioning, touch screen display and easy folding capability.

It also has a good speaker system and a workout fan, things you don't find too often on comparably priced treadmills.

Take a look at the Carbon T7 as well if you want to save a little money, and if you think you want something a little more durable, consider the Carbon T14 or Pro Series (Pro 2000 and Pro 9000) as well.

No matter what you choose, you'll likely be very happy with your new ProForm treadmill.

The ProForm Carbon T10 is currently on sale

Get the popular ProForm Carbon T10 on sale right now!