The NordicTrack T8.0 Treadmill – A Newer Version of the T5.5

The NordicTrack T8.0 treadmill is a step up from their T5.5 version. Listed at nearly $1500 but retailing on sale for $900, this is a NordicTrack that might satisfy a budget minded user.

A slightly trimmer version of the NordicTrack T5.5 with some definite improvements, this machine has all of the fun stuff, like workouts powered by Google Maps, and there are some improvements with regard to the motor, which is a respectable 3.0 continuous horsepower. The 6" backlit display is easy to read and features a ¼ mile running track readout to chart your progress.

The specs for the NordicTrack T8.0 treadmill are: 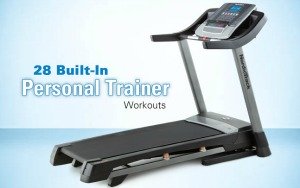 UPDATE:  The NordicTrack T8.0 treadmill is no longer being sold.  For a comparable machine check out the newest NordicTrack treadmills here.

There aren't a lot of reviews out there for the NordicTrack T8.0 treadmill, which is a shame because it's a step up from NordicTrack's T5.5. The few reviews are articles we found focused on the way the company is responding to customer complaints by focusing more on the nuts and bolts (literally as well as figuratively) of the machine.

Users liked the increases for speed (up to 12 miles) and incline (up from 10° to 12°. Those extra few degrees can make a considerable difference in your workout. There continues to be a lot of buzz about the iFit system. Some users love being yelled at by Jillian Michaels, while others were more motivated by friendly competition with other users around the globe.

Incremental changes can be a good thing. NordicTrack has brought your program choices up to an impressive 28 workouts; including interval training, hill climbing and endurance workouts.

The workouts powered by Google Maps keep things interesting, and the deck is far less bouncy on this model than some others, so you're getting a more realistic run than on some older models.

We also like the longer, 58" running surface. The warranty is now lifetime on the motor, reflecting the company's use of better components. Customer service still seems hit or miss, but we aren't going to count the NordicTrack T8.0 treadmill out.

For less than a thousand dollars, this isn't a bad little machine for anyone who likes a bit of distraction or a pep talk during their workouts. 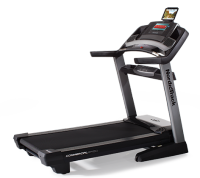